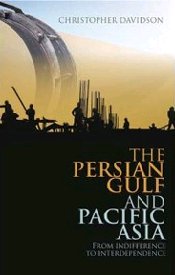 An electric combination of economic, diplomatic, and cultural concerns have “Asianized” Asia, uniting the continent’s many countries under a framework of interests and trends. Pushing Asia’s domain even further is a new and abiding relationship between its three most industrialized economies and the Persian Gulf’s six monarchies. What began as a basic, twentieth-century marriage of convenience founded on the trading of hydrocarbon has now evolved into a complex, long-term commitment guaranteeing continuous exchange of resources and requirements. This bond has also strengthened the non-hydrocarbon, bilateral trade that facilitates wealth investments on both sides, building lucrative opportunities for Pacific-Asian construction and, in China’s case, vast forces of labor.

Christopher Davidson, an acclaimed expert on the Middle East’s rapidly changing economy, details the eastern and western factors that have brought Asia and the Gulf closer together. Although this relationship has yet to include military arrangements, evidence suggests that the two regions have bolstered other noneconomic ties. Davidson unwinds the complex links between these emerging powers and shows how their unique economic, political, geographical, and cultural identities both strengthen and threaten their future partnership.